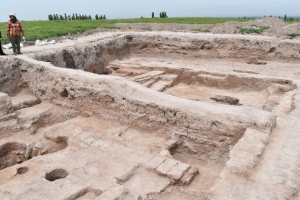 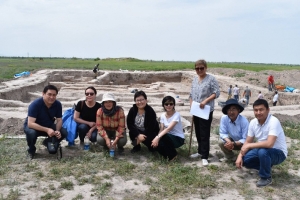 Academician Askar Kutanov (CAREN CC) received invitation from Dr. Bakyt Amanbaeva, Institute of History and Culture Heritage of the National Academy of Sciences of the Kyrgyz Republic and from Dr. Yamauchi-san from Japan, to visit Ak- Beshim (Suyab-ancient city on the Silk Road) on May 12, 2018. It was a pleasure to join the working group of Deputy Minister of Culture of the Kyrgyz Republic together with the responsible secretary of the Kyrgyz National Commission for UNESCO who had a working trip to Ak-Beshim.
Ak-Beshim (Suyab) is in the UNESCO World Heritage list. Suyab was discovered in 1894 during archaeological excavations by Wilhelm Bartold. Particular interest of scientists are the remains of Buddhist temples, which they find in Ak-Beshim. Apart from Buddhist temples, there were a Nestorian church and cemetery from the VII century. Kyrgyz and Japanese archeologists removed many ceramic shingles.
E-culture is one of the important and developing applications in CAREN network, which also well reflected in CAREN slogan “From ancient trade route to high-speed data highway”. One of the sessions of third CAREN Regional Networking Conference (CRNC2018) that will be held in October 23-24 in Dushanbe, Tajikistan, is dedicated to Cultural heritage, which aims to foster collaboration between archeologists from Europe, Asia and Central Asia.