CONNECT Interview: Round table with the CAREN Cooperation Center

In the final chapter of our CAREN3 series, we interview the new regional coordinator and director of the CAREN Cooperation Center (CAREN CC) Almaz Bakenov, his deputy director Arianna Akmatova and the former director Askar Kutanov. Together they explain the current status of Research and Education in Central Asia following the end of the CAREN projects and their plans for the future of the initiative. 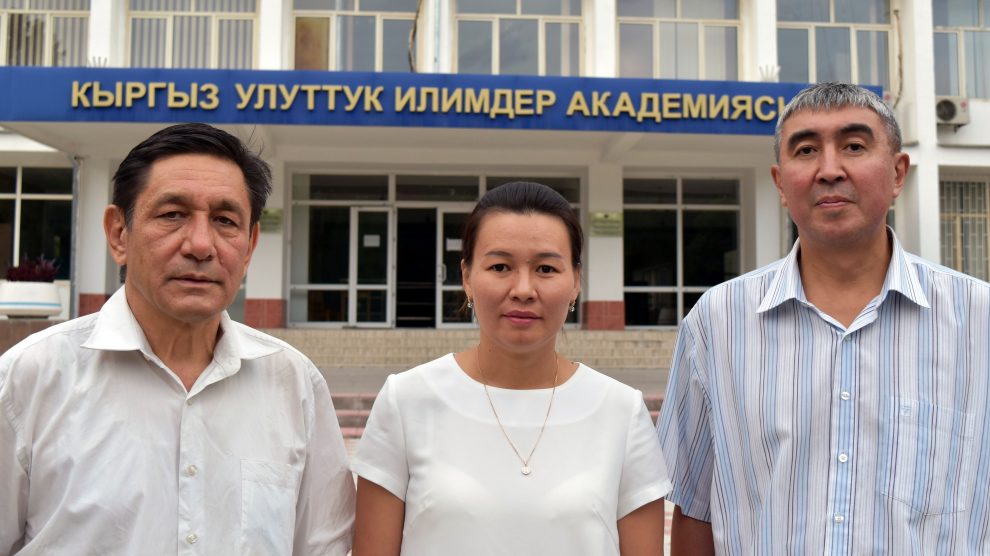 Almaz, first of all congratulations on your recent appointment as new director of CAREN CC. Could you and Askar tell us more about CAREN CC and its role in Central Asia?

Almaz Bakenov: The CAREN CC was established in April 2017 to sustain the achievements of the EU-funded CAREN project. Its role is to support the development and strengthening of research and education networking in Central Asia, and to promote cooperation between academic communities, both within Central Asia, and with other regional networks in Europe and in the rest of the world.

This new role adds up to my primary job as director at the Department of Information Technologies at the American University of Central Asia. Coordinating the CAREN CC will not be an easy task, but I decided to accept this responsibility also because of my personal history with the initiative. I have been involved in the series of CAREN projects since their start back in 2009, and in their predecessor SILK, funded by NATO, on which I started collaborating with professor Askar Kutanov as soon as I came back from the US to Kyrgyzstan in 2003.

Askar Kutanov:After 20 years passed working in R&E, I thought it was a good time to step down from my role as CAREN CC’s regional coordinator and director. I will keep helping and supporting Almaz and I trust that he will successfully continue the work done until now.

Central Asia is an area of historical and strategic importance and the series of CAREN projects accompanied the region during times of profound change. How did this reflect on regional and local development?

AK: In the beginning it was the SILK project, that established regional connectivity, but it was satellite-based, so limited by bandwidth and quite expensive. Even today a poor regulation of the telecommunications market maintains prices quite high for local NRENs. However, starting from 2009, the three phases of the CAREN project greatly helped to increase bandwidth and expand services for our NRENs.

Through CAREN, isolated academic communities of the Central Asian region became part of the global R&E community, and advanced network technologies and services were introduced to local users. Furthermore, the several regional conferences we organised in each CA country contributed to strengthen collaboration between scientists in the region.

How will the new management influence the future of CAREN CC and its work in the next period? And how do you plan to ensure the sustainability of the initiative?

AB: Our activity is currently going well and prices for connectivity are getting lower. At this stage, we need to rethink our role as CAREN CC, and work to bring on board neighbouring Central Asian countries as new members. Clearly, CAREN CC should also help in the process, and in the development of services and infrastructures, as not all NRENs receive government support. We would also need to increase the involvement of both CAREN CC and our NRENs in the global market and focus on finding further funding opportunities. In fact, I believe that a key indicator in my next years as director of CAREN CC will be the funding that we will have obtained to help scientists and educators in the region.

We are well aware that Central Asian countries – due to their economic condition – do not have much funding available for the scientific community and for higher education, especially during the current Covid-19 pandemic. Nonetheless, we aim to develop a solid funding strategy, catalyse intra-regional collaboration, join forces to initiate new projects, and even develop new services, even if to do so we would first need to solve the key issue of funding.

Do you foresee an involvement of other countries in the next period?

kmatova: From my perspective, within R&E communities, we have many partners who are particularly interested to be involved in CAREN activities and would like to cooperate with the CAREN CC. This is surely true in Turkmenistan, and even in Uzbekistan, where our partners do not have their own Research and Education Network yet but are interested in establishing one and in starting to work with us. In Kazakhstan some considerations on commercial interests might be necessary: their prices for connectivity are cheaper so it could be less economically beneficial for them to join. However, the interest from their research exponents remains high, as a collaboration with the CAREN CC would greatly benefit their work.

So – even if on a higher level there might be political issues – I believe that in the near future it will be possible to get all countries together, because all these organisations understand the benefits of cooperation, the value of the services provided and of e-libraries, and the economic advantages of joining forces in a consolidated region.

What is the current status of scientific collaboration in Central Asia and how does CAREN CC support it?

AK: Researchers of NRENs in Central Asia continue to make great efforts for international collaborations in such areas as environmental monitoring, water management, telemedicine and distance learning, through which they share their experiences and gain knowledge from leading experts.

As an example, the Central-Asian Institute for Applied Geosciences partnered with the on water management and on environmental monitoring, with a focus on glaciers, that are extremely important in Central Asia and that have been melting of about 29% of their original volume for the past few years. Such collaborations and data exchanges between scientists are fundamental to tackle challenges related to climate change.

In Tajikistan instead, there are very good conditions for space and planetary observation and as such there are powerful telescopes in the region. The Institute of Astrophysics of the National Academy of Sciences of Tajikistan collaborates and shares data with many research institutes in Europe and in the US, monitoring asteroids that could fall on Earth and cause substantial damage.

Regional collaboration between archaeologists among all Central Asian countries also led to a great number of applications in the fields of e-culture and digital heritage.

AA: Another extremely important topic we cover is telemedicine. With CAREN CC we are continuing our collaboration with TEMDEC, the Telemedicine Development Centre of Asia, based in Japan.

They provide training on early detection of gastric cancer, involving both medical doctors and network engineers of hospitals, in Japan, Russia and Kyrgyzstan. Until last year – when the CAREN project was still active – we held several face-to-face conferences in which doctors came from Japan to deliver hands-on training for our doctors, but at the moment we are ensuring the sustainability of the initiative by regularly organising teleconferences. A big problem throughout all Central Asia is that there is a scarcity of good doctors, but now thanks to distance education and e-learning doctors from big cities are able to teach to doctors in provinces and save lives by spreading their knowledge.

The global Covid-19 pandemic is increasingly affecting the region. How can scientific collaboration help?

AA: The pandemics showed the weakness of the medical system in our countries: the poor healthcare management, the lack of medical doctors, the absence of necessary equipment. Sharing best practices of infected patient care, developing telemedical solutions, initiating projects to design mass ventilator systems in hospitals with a large number of patients in critical conditions would be priceless support.

AK: In the current situation e-learning became especially relevant. In fact, from September all schools and universities in Kyrgyzstan will start distance classes, using e-learning technologies and networks, and NRENs made special efforts to expand their services to the communities and provide our users with a variety of key tools and platforms.

Tell us more about the services and benefits that CAREN provides to researchers and NRENs in Central Asia. Will they still be available via CAREN CC?

AA: A decade ago, high-speed internet connectivity in Central Asia was only a dream of the researchers but CAREN projects brought not only a high-capacity network but also advanced ICT services. CAREN CC aims to become the Centre of Excellence for advanced ICT services for academia in Central Asia and does its best to keep the infrastructures and services established during the CAREN project. We continue to provide such services as eduroam, eduGAIN, e-learning and video conferencing tools and platforms, digital libraries and cloud services like the G Suite for Education.

Will the collaboration with GÉANT continue and how? What are its benefits for NRENs in Central Asia?

AB: CAREN CC has signed a Memorandum of Collaboration with GÉANT to ensure continued access to global advanced ICT services of the pan-European GÉANT network. This currently benefits the more than two million users at academic institutions represented by NRENs in Central Asia, who can exchange data and access to European R&E resources. We consider GÉANT our key partner and we look forward for our good history of collaboration to continue, hopefully also through new projects.

AK: A possible fourth CAREN project would be extremely beneficial for Central Asian countries and for their development, and together with further improvement of regional connectivity, it could help implement the strategy on EU-Asia connectivity adopted last year. I believe that our region, with its strategical geopolitical position would be key in connecting Europe and Asia, and that R&E networks would serve as a driving force for the development of bilateral partnerships.

Could you tell us more about your vision and plans for the next few years and about your hopes for the future of CAREN?

AK: We hope to enable other countries to join CAREN CC, improving the regional collaboration, to further strengthen our ties with Europe and Asia and perhaps also to have a continuation to CAREN projects.

CAREN CC will continue its mission to support Central Asian NRENs with a focus on information security, on strengthening the human capacity, and increasingly on the development of services, as we will need to compete with commercial providers. Covid-19 changed the plans of many organisations, but it also showed the importance of e-learning and proved to universities and users in Central Asia that NRENs provide unique services that commercial providers could not deliver.

AB: I agree with Askar, and I especially look forward for more countries to join the CAREN network, to represent the full picture of our beautiful region, its rich culture and history and its contribution to global research.