Our series of interviews on the CAREN3 Project continues with Robert Janz, formerly from the University of Groningen, now freelance ICT consultant. Involved since the early days of the project, he told CONNECT about his past 20 years of experience in bringing connectivity and enhancing collaboration for R&E communities in Central Asia, through CAREN3 and its predecessors. 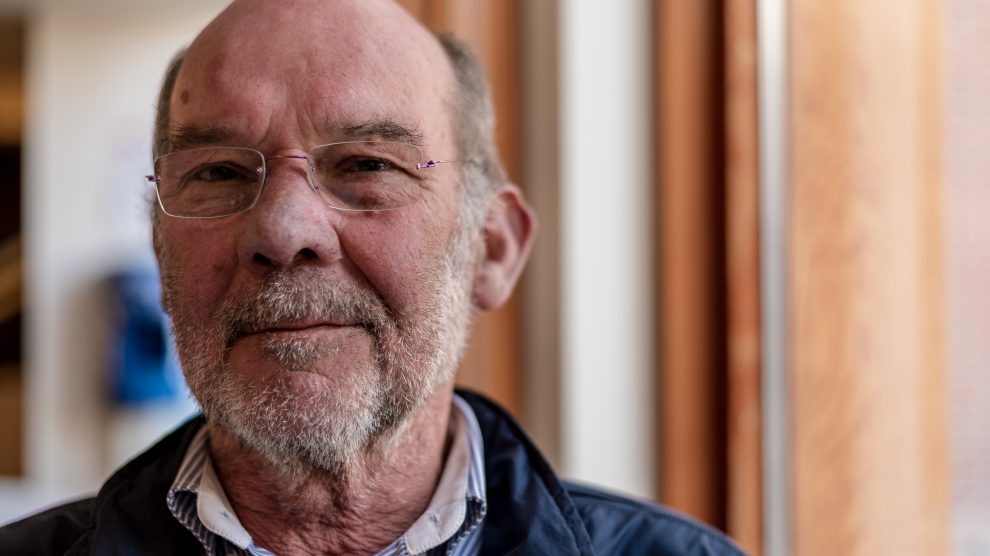 Robert, when did the project originate and which were the parties involved?

It depends on what you define as THE project. The series of CAREN projects started in 2009, but it was the continuation of another series of initiatives, originating in the SILK project, which dates back to 2001. Funded by NATO and with some additional funding from the EU, the project aimed at creating a “Virtual Silk Highway” by connecting research communities in five Central Asian countries (Kazakhstan, Kyrgyzstan, Tajikistan, Turkmenistan and Uzbekistan), plus Southern Caucasus (Armenia, Azerbaijan, Georgia) and later Afghanistan. Afterwards, CAREN focused solely on Central Asia, while countries in the Southern Caucasus eventually converged into other projects [now EaPConnect].

SILK was managed by the University College of London, with the Leadership of Professor Peter T. Kirstein, often recognised as the father of the European Internet, who recently passed away and who was the driving force of the initiative. At first, my contribution was on a personal basis as a technical advisor for NATO, while the University of Groningen, got involved later on, mainly on training activities and events. When CAREN started, I was seconded to the new coordinator organisations DANTE and then GÉANT, which accepted the many challenges of a project in Central Asia and always provided their very professional expertise in project management and procurement.

What was the status of academic collaboration in Central Asia when you started?

If you ask where we came from, I would say we started from zero.

But to explain better, I will have to go all the way back to the late 90’s, when I first came in contact with the NATO Science Programme. We were just out of the Cold War, and all the former satellite republics of the Soviet Union were left without either a plan or a budget for academia and scientific research. Alongside its political and military programmes, it was a key priority for NATO to maintain and enhance collaboration between scientists from eastern and western blocks. As such they were funding several small scientific projects not only in Central Asia, but also in the Southern Caucasus and in Eastern European countries.

Furthermore, CA countries were paying enormous amounts of money for connectivity. Even in Europe the web was just at its beginnings and costs were higher, but in CA we were talking of 64kbps at tens of thousands of dollars per month! Peter Kirstein, who at the time was also chair of the Networking Panel of the NATO Science Committee, noticed this strong need for connectivity and convinced NATO to redirect funding from the multitude of loose grants into one larger grant that would allow CA to build its own communications network. It was then that the scientific collaboration between CA countries and with Europe really got off.

During this first phase of projects (SILK, SPONGE, OCCASION), lasting up to 2008-2009, we created the network (that still included Southern Caucasus countries) and started setting up NREN organisations, not yet present in CA. Further, with so called NATO Infrastructure Grants, we started building e-infrastructures within the countries to connect academic centres and universities to the Networking Operating Centres of the NRENs.

To summarise, at the beginning of SILK we had zero, after 8 years we had established NRENs in all CA, but it was only through the CAREN project we achieved a proper regional collaboration, which finally resulted in the CAREN Cooperation Center (CAREN CC) in Bishkek.

The series of SILK projects ended in 2009, marking uncertain times for a continuation of similar initiatives in Central Asia. What made CAREN possible and what impact did the project have on the region?

Towards the end of the 2000s, NATO’s focus shifted, as they believed the initiative had gone out of their scope. New opportunities for funding came instead from the EU, now willing to support CA countries on the condition that there was also formal and economical support from the local governments.

Coordinated by DANTE – later to become GÉANT –, the first in the series of CAREN projects started with a massive technological migration: from a distributed satellite network, with its hub in Hamburg, to a fibre optic network. Our initial aim was to set up a proper regional network, interconnecting CA countries among each other and with redundant links going out to Europe. However, we found out that this was not actually possible, mainly due to the monopolistic attitude of local telecom companies demanding huge prices. The absurdity was that connecting the 80km from Almaty (Kazakhstan) to Bishkek (Kyrgyzstan) was more expensive than linking a single CA country all the way back to Europe!

As a consequence, we ended up connecting the Central Asian countries singly, either to Frankfurt – as the nearest point of presence in the GÉANT pan-European network – or to Hong Kong, linking to the TEIN Asian network. On top of that we built a virtual Central Asian network, even if there wasn’t a direct connection between the countries. Clearly that resulted in latency problems, because the signal had to travel 5.000km and then come back, but we managed nonetheless to provide access to fundamental information, to enable key regional collaborations, introduce virtual environments, video conferencing and distance education to universities and academia in CA.

Tajik and Kyrgyz Academies of Sciences even established joint doctorate degree programmes, with joint dissertations and defences via video conference. That, in my opinion, is a very nice and significant example of CAREN’s impact on the region. 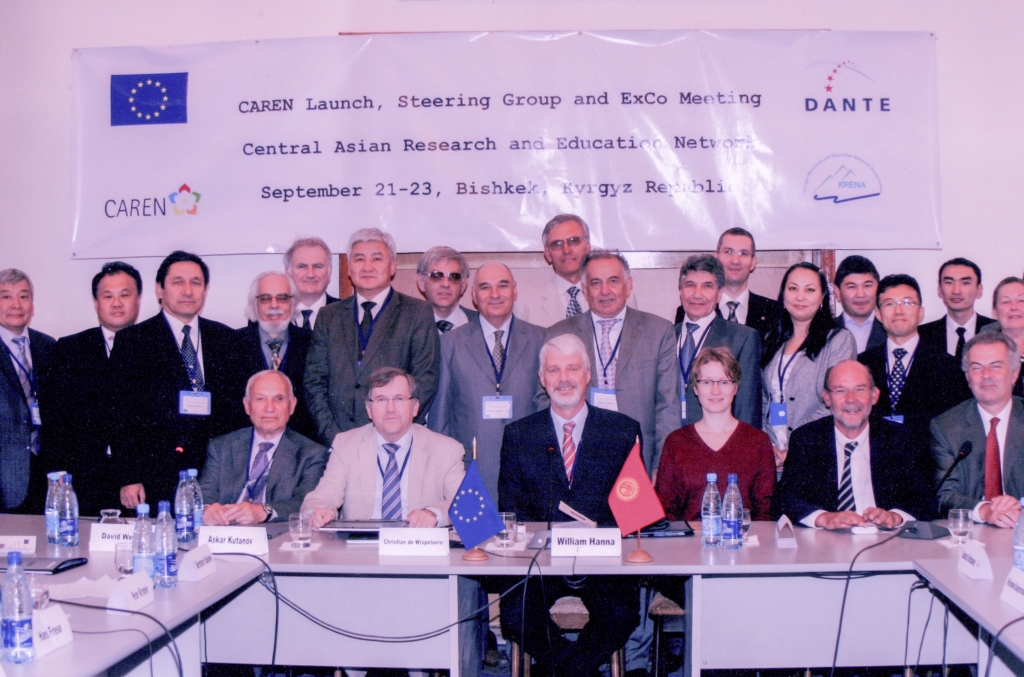 How did CAREN differ from its predecessors and what were its key achievements?

CAREN differed from SILK in several aspects. As I was mentioning, the first major change CAREN had to face was in terms of technology, as we moved from satellite to a fibre optic network. The establishment of the CAREN Network Operating Centre (CAREN NOC) in Bishkek, Kyrgyzstan, was essential for the success of this operation.

Then in CAREN2 and CAREN3 we increased the focus on services and on their development in the regional context. Connectivity is essential but it is also meant to be a vehicle to provide advanced ICT services for the academic communities. In CA this proved especially challenging, mainly because of language barriers. In fact, as English was not so well known, services and documentation were often provided in Russian or in local languages.

A major advance was the foundation of regional organisations. During SILK, the conversation was mainly one-way. But if we want our work to be sustainable and for CA countries to stand on their own feet, we needed a direct involvement of the local communities and bi-directional dialogue. Moreover, other than providing connectivity to the NRENs, we also needed to pass them the knowledge and capabilities to become more independent. In this respect, the foundation of the CAREN Cooperation Center (CAREN CC), was an absolute paradigm shift from the SILK period and the first step towards sustainability. Professor Askar Kutanov, a member of the Academy of Science who I already knew from SILK, was appointed as the regional coordinator for CA. Then again, the second step in this direction was creating the CAREN NOC within the region.

What would you say were the major challenges you encountered during all these years?

There were several, depending on the timeframe we are looking at, but overall I would say the main one was sustainability.

One of CAREN’s main objectives was to accompany CA research communities through a transition towards self-sufficiency, with progressive increase of funding and support from national governments and a consequent decrease of EU funding. From a first phase of CAREN with very little national funding, the requirement went up to 10% of the project cost in CAREN2, to be then based on the country’s GDP in CAREN3. However, some of the governments did not consider research and education a priority and preferred not to invest further in the project and to withdraw. Now instead I feel like there is growing awareness of the potential impact of education on the development and economy of the region.

The lack of technical infrastructures in CA also posed a big challenge throughout all our work. Even now, the status is quite poor within the countries, as capitals are connected but provinces still rely on radio connectivity. This however can be tackled, if enough funding is provided.

I will renew the question we asked to CAREN3 project manager Veronika di Luna. Based on your 20-years’ experience in the SILK and CAREN series of projects, what are your expectations for the future of similar initiatives and what would you like to suggest to the new coordination team at CAREN CC?

When CAREN3 ended we were in a near optimal situation: the CAREN CC was growing stronger, the NOC was operating well, more and more services were being supported and Turkmenistan and Uzbekistan were either waiting to join or reopening dialogue with the EU. Had we obtained an extension for the project, our perspectives would have been better and in a couple of years we would have achieved to lower EU contribution and to connect up to five countries. Now the situation is more complex, and if no additional funding is provided, I fear that other global players might step into the vacuum.

At this stage, my suggestion to the CAREN CC team is to maintain a strong leadership, ensure long-term sustainability by picking up funding opportunities and keep the flame alive during these difficult times.